Investing in the future of Newcastle A cutting-edge urban development being built on the site of a former coal mine in Newcastle will create 4,000 jobs and put the city at the forefront of the knowledge economy. Newcastle Helix is under construction on a 24-acre site and is set to be a centre of world-leading research and technological advances, which will help the city write the next chapter in its history. Cottages of mine workers which once stood beside the former colliery.

The £350m collaboration between Legal & General, Newcastle University and Newcastle City Council is firmly positioning the city as a major national and international hub for scientific research and technology businesses, creating knowledge-based jobs for future generations. On completion, it will boast 500,000 sq ft of office and research space, as well as 450 homes and even a hotel. With some buildings already finished, it is bringing together a community of academics, industry leaders, businesses and world-class researchers.

The development builds on Newcastle’s growing reputation and is expected to attract more pioneering businesses to the city, driving local economic growth. It is a unique ecosystem of innovation, purpose-built to enable the commercialisation of new ideas and is also designed as a springboard for spin-out companies from the university. Companies will be based in buildings like The Lumen and The Spark, our flagship office spaces, and The Biosphere, a specialist facility offering high-quality offices as well as biology and chemistry laboratories.

The iconic blue star marks the site of the former Scottish and Newcastle Brewery.

Professor Jane Robinson, Dean of Engagement and Place at Newcastle University, explains: “One of the really exciting things about Newcastle  Helix is the way it exemplifies and accelerates the reinvention of the North East economy. The Biosphere has been really successful, with everything from drug development for hard-to-treat cancers to new synthetic chemistry projects and great high-tech innovation taking place there. What we’re seeing, are more and more businesses that are both spinning out of the university and being attracted by being able to access the university’s expertise.”

One of the really exciting things about Newcastle Helix is the way it exemplifies and accelerates the reinvention of the North East economy.

The site is also attracting international attention. The Japanese Ambassador recently visited the site, and there have been delegations from the US, China and Germany. Nicola Palmarini, who recently moved from Boston to take over as Director of National Innovation Centre for Ageing, previously worked at Massachusetts Institute of Technology and IBM.

From coal to code

While Newcastle Helix was a coal mine around a century ago, it then became the home of the Scottish and Newcastle Brewery, which produced the iconic Newcastle Brown Ale. When that closed in 2005, with the loss of hundreds of jobs, few people imagined that it would emerge as one of the most innovative centres in the UK. But the city council and university had a vision, bought the site and began the slow process of preparing it for building, including removing 38,000 tons of remaining coal.

It was a slow process made more difficult by the economic crisis, but when they eventually sought a partner to help with development, in 2017, they found that Legal & General was looking for just such an investment.

The Legal & General deal went down enormously well, particularly with the private sector in the region, because they saw a big national institution investing in our city.

Tom Warburton, Director of City Futures at Newcastle City Council, explains: “Legal & General were looking for projects and investments that made a return for their investors but would also do good in cities. And they were particularly interested in the innovation pipeline, in bringing in, creating and growing businesses. So, we had a meeting of minds. The Legal & General deal went down enormously well, particularly with the private sector in the region, because they saw a big national institution investing in our city.” The Spark, one of the new state-of-the-art buildings at the site.

Nigel Wilson, Chief Executive of Legal & General, says: “These are exciting times for Newcastle. Having grown up close to the city I have seen it survive through difficult times as well as more positive ones. This is another new chapter for Newcastle, and our partnership with Newcastle Council is a shining example of a local authority which embraces the opportunity afforded by devolution by forming exciting investment partnerships to drive forward the growth of our towns and cities.”

Prof Robinson adds: “What is very clear is that the investment that Legal & General brought and, critically, the long-term commitment and the way in which they worked in partnership, has acted as a huge catalyst for the pace of development. Certainly, in the past two-or-three years, things have really accelerated. They’ve been a critical part of the partnership. 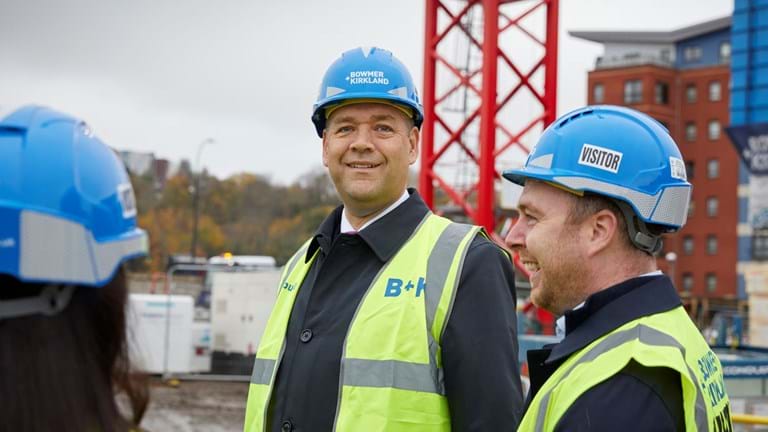