A year since Legal & General announced its investment in The Interchange building, we look at how the company’s investments are transforming the city.

“Jaw dropping is the phrase that comes to mind when I think about The Interchange,” says Tom Roberts, Head of Strategic Investment at Legal & General Investment Management Real Assets. “The residential element of the Interchange will be the tallest building in Cardiff when it’s completed. You can see it from so many places in the city centre and for miles around.”

The 120,000 square foot office element, which will become Legal & General’s headquarters in Wales, is the crescendo of a £475 million investment by the company into the regeneration of Cardiff’s Central Square. It is the largest privately funded development in Wales, and is run in partnership with Cardiff Council, the Welsh Government and Rightacres.

“The transformation of Central Square from what was a dilapidated corner of the city centre into what is now its commercial heartbeat is remarkable,” says Roberts.

Not only is the regeneration changing the face of Cardiff, but it is also stimulating the economy and injecting vibrancy into Central Square.

“This has been one of the most successful regeneration stories in the UK,” says Roberts. The project has already delivered the impressive BBC Cymru Wales broadcasting studio and a 270,000 square foot headquarters for HMRC in Wales, as well as retail space.

Seeing these new companies move into the city and thrive is a clear sign of the positive economic impact that our investment is having. The university that has situated its school of journalism next to the BBC headquarters is going to thrive for decades to come. Their students are likely going to graduate and move into employment within the BBC or other media outlets that are thriving off the core of the presence of the BBC in Central Square. Having a direct link to such an important media presence gives the university an edge over so many others across the UK.

In addition to the Interchange office building, which Legal & General has leased for the next 25 years, the final phase of the regeneration project includes a 14-bay bus station and 318 build-to-rent homes.

Roberts, who is from Cardiff, explains what the redevelopment means for the people who live in the city. “Central Square is a 12-acre site that is immediately outside the Central station. We’ve transformed people’s first impressions; previously, when you arrived by train, it was underwhelming to say the least. Now, people’s first impressions are in line with what they should be for a European capital city.”

Another major milestone is the newly opened Parkgate Hotel. Legal & General is delivering the 170-bedroom facility, located next to the Principality Stadium, in partnership with the Welsh Rugby Union. “Cardiff has suffered from a dearth of new openings of upper scale hotels in the past decade if not 15 years, so the arrival of the Parkgate will be a game changer,” says Roberts.

The economic benefits that this large-scale investment is bringing to Cardiff and the surrounding areas reflect Legal & General’s inclusive capitalism model, which sees us generate returns for shareholders while also making a difference to society. “We talk about the importance of levelling up. Our activity in Cardiff has been delivering that levelling up agenda since long before that was a phrase we used,” explains Roberts.

A physical example of Legal & General’s inclusive approach is the Betty Campbell statue that was unveiled in Central Square in September, which we made a sizeable financial contribution towards. “Betty Campbell was the first black headteacher in Wales and was a real pioneer for the civil rights movement in Wales,” says Roberts. “The statue signifies Legal & General’s on-going ambitions to be involved in projects that have a really positive impact on the built environment, the landscape of our urban areas and of course the inclusive capitalism agenda.”

A new paradigm in office development

Another example of how our socially responsible investing agenda has shone through during the Central Square regeneration is the green credentials on the Interchange building. The fit out of the building is targeting net zero carbon and we are reducing embodied carbon throughout the base build. Our aim is to be certified BREEAM Outstanding, a top sustainability rating.

We’re really looking to drive a paradigm shift here from what has been the norm from an office development perspective. It would have been understandable and almost expected for us to have followed the norm, but we aren’t a business that does that. We like to take a step ahead and challenge convention. This will help evolve how cities are designed to be sustainable.

As well as being better for the environment, the building will be better for staff too. “The improvement we’ll see in terms of the quality of the space, and what that delivers in terms of collaboration, employee engagement and staff retention and attraction is absolutely enormous.” Roberts says the roof terrace overlooking the city will be a particular highlight.

That the Interchange is the final phase of the larger regeneration project is fitting, according to Roberts. “It isn’t just another investment, it’s our new home. It will enshrine an enduring relationship between Legal & General and Central Square. I know everybody who’s involved is really proud to have secured such best-in-class facilities for the business, but also we’re really proud of the wider benefits that the regeneration has and will continue to deliver for the people and the city of Cardiff.” 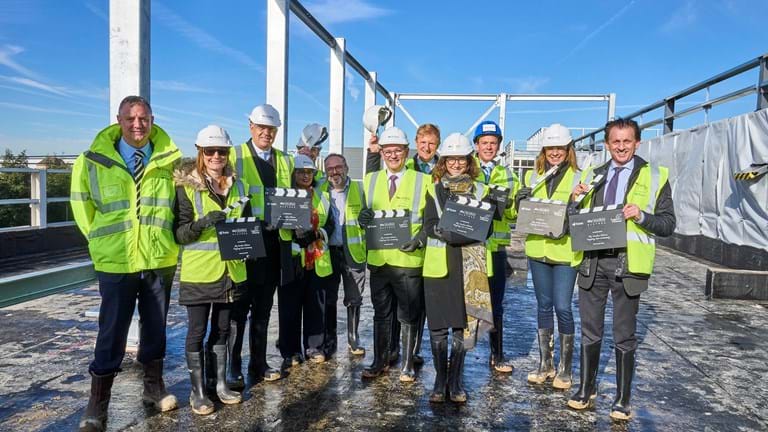